I got this pistol in May, 2007 as part of a multi-gun estate purchase. It is a fairly early one that is very tight mechanically. It shows almost no wear to the bluing, but has several spots of pitting. Here you can see one area, on the little plate peened in over the locking block recess in the frame. 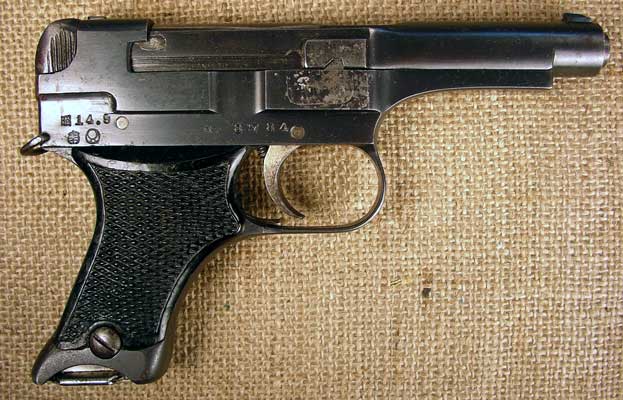 The left side shows somewhat worse pitting near the muzzle end of the slide, to the left of the ejection port and on top of the bridge at the rear of the frame. 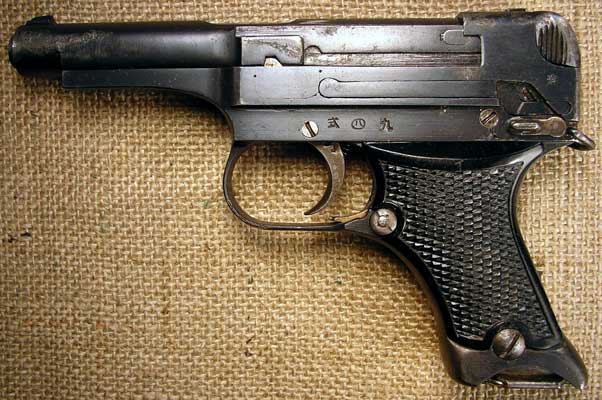 The date 14.9 means the ninth month of the 14th year of Emperor Hirohito’s reign, i.e. September, 1939. The character in front of the date is the kanji character sho, short for Showa, the name of Hirohito’s reign. The two characters below that are the symbols of the company Chuo Kogyo on the left and Nagoya Arsenal on the right. Note that this order was reversed on later pistols from about 16.8, around serial number 19000 (very early pistols up to about 14.1 also had the logo on the left, but with very wide spacing). The Chuo Kogyo symbol on the left is a stylized version of the kanji character nan/nam, as in Nambu, the name of the designer, who was an executive advisor to and shareholder in the company. The Nagoya Arsenal symbol on the right looks like a top-heavy 8 in a circle, but is supposed to represent the mythical shachi, or dolphins, that adorn the roof of , the city’s most famous landmark. 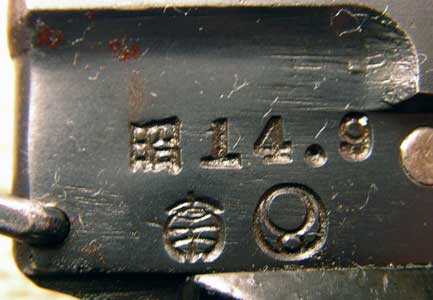 The serial number is still in four digits over four years after production began in mid-1935. Total production reached only a little over 71,000 before it ended in mid-1945. 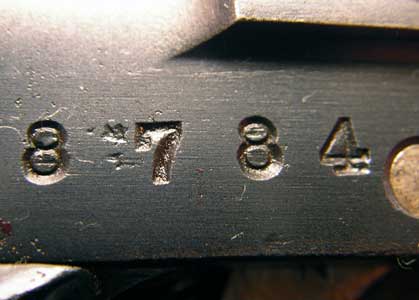 The serial number on the magazine matches. The dot above the 8 indicates this was the spare issued with the pistol. The symbol below the 8 is the kanji to as in , which was an inspection mark. Type 94 magazines were nickel-plated like this one until about Showa 17.1 (January, 1942). Very early pistols had flat-bottomed magazines until about 12.7, when a rib was added to the base plate to strengthen it. 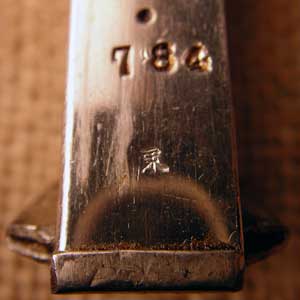 One unusual thing about the Type 94 is that if you hold it up to the light you can see a gap between the frame and slide. This is not wear, it is just how the gun was designed. This gun is mechanically one of the tightest I have and has a bore that suggests it was hardly ever fired. 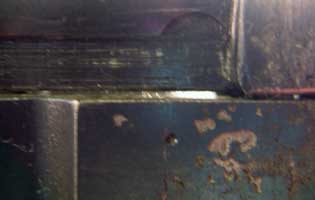 Let’s take a look at some of the differences between early and late Type 94s. One obvious difference is the level of finishing. Early guns have a much nicer bluing applied over finely fitted and polished surfaces. Late ones have a thin, blacker bluing applied over very rough surfaces. This change was a gradual one. The photo below shows a more subtle difference: the grip on the left from this 14.9 date has coarser checkering than the one on the right from a 19.6. The earliest Type 94s had very fine checkering until about Showa 12.10. Then they switched to this coarser checkering until about 14.2 (so 14.9 is actually quite late for it to appear). Then they switched to a medium checkering as shown on the 19.6 grip panel on the right. Eventually in 19.7 they dropped bakelite altogether in favour of plain slab wooden grips. 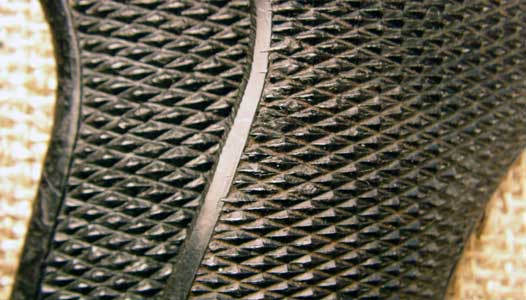 If you look at the underside of the frame you can see a more noticeable change: on the 14.9 on top the frame and slide are machined to be narrower (15mm) than on the 19.6 on the bottom (18mm). 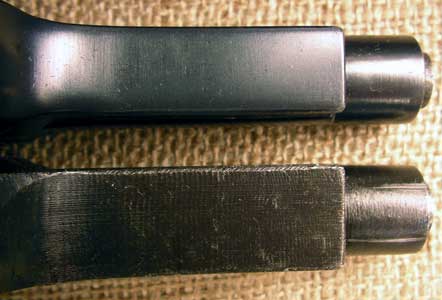 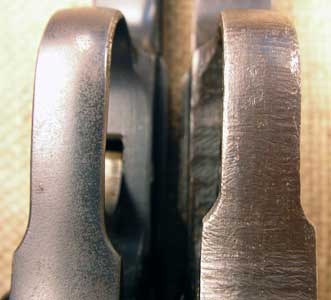 On early pistols like this 14.9 the raised area at the rear of the frame surrounded the rear tip of the sear bar, which was also raised so the two parts are flush. 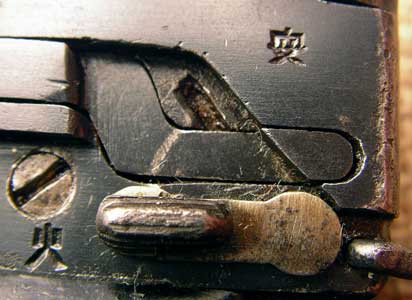 Here, for contrast, is a shot of the same area on a 19.6. Note that the raised area around the sear bar has been machined flat and the sear bar tip is now also flat. 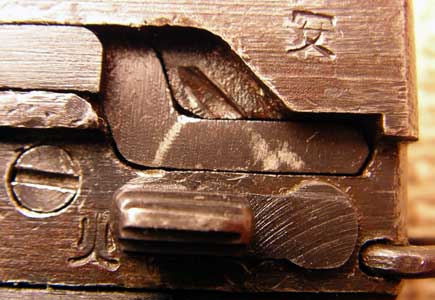 The spacing of the model designation on the 14.9 is quite wide, spreading across 19mm. The characters read from right to left: kyu-yon-shiki, or “Type 94”. Note also the relatively good fit of the front tip of the sear bar (this is the spot that, if pushed when the safety is off, will fire the gun without use of the trigger). The little line at the far left of the photo is not a crack; it is the seam where a metal plate was peened in to cover the gap left when the locking block area was machined. On early guns this is fairly well done, but it is extremely noticeable on later, cruder guns. 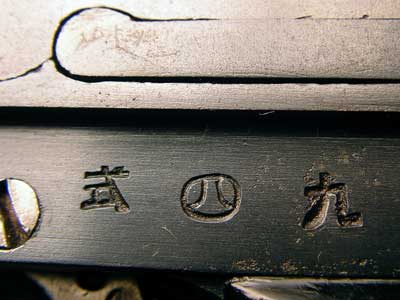 By contrast, on this 19.6 the model designation character spacing is much closer, covering just 14mm. Note the much cruder fit of the front tip of the sear bar.

Last updated: May 23, 2007. All contents are copyright Teri unless otherwise specified and may not be used elsewhere in any form without prior permission.