Japanese officers purchased their own weapons until 1943 and often chose foreign pistols until the war cut off supplies. Japanese pistols were either bulky (e.g. Papa Nambu, Type14) or expensive (Baby Nambu), so small foreign pocket semi-automatics were very popular, especially the Model 1910 Mauser in .25ACP, Model 1914 Mauser in .32ACP, Model 1910 Browning in .32 ACP and Model 1903 Colt in .32ACP. These guns could be purchased through private dealers or, more commonly, through the gun desks at Officers’ Clubs (Kaikosha for the Army, Suikosha for the Navy). The Japanese also made ammunition for a variety of foreign guns, especially .32ACP, although it was not unknown for Japanese officers with .25ACP pistols to be found carrying pre-war American-made ammunition.

In most cases the Japanese did not mark their foreign purchase pistols, so the only way they can be identified is if there is an unambiguous pedigree, matching marked holster, factory letter, etc. I have a couple of pistols I bought as representative of this category of weapon, although to the best of my knowledge these specific pieces did not serve in . I do have some related accessories that are Japanese, though, such as a holster for a 1910 Mauser, .32ACP cartridge box and cartridges, etc., and they are shown below. For more information on foreign pistols in Japanese service, see Chapter XIII in the Derby & Brown book.

This pistol is a Model 1914 Mauser semi-automatic in .32 ACP calibre. These were so popular that the Japanese, who usually designated handgun ammunition by the gun it was intended for rather than the calibre, labelled .32ACP ammo boxes “cartridges for medium-sized Mauser pistol” (see below). I got it at a very good price at an auction in August, 2005. 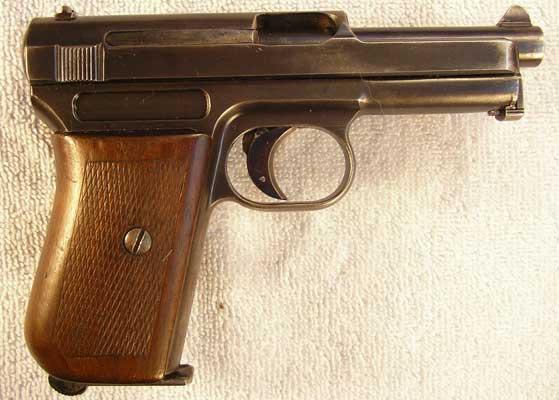 Here is the left side. The little grooved lever below the Mauser banner is the safety (down=safe). The button just below that is the safety release. The grips on these pistols are one-piece wrap-arounds that leave only the front grip strap showing. 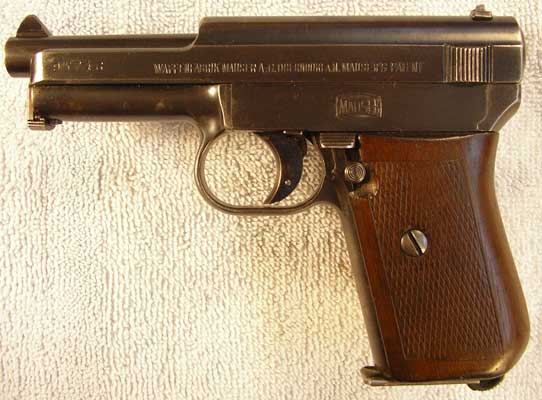 Looking at the same side closer up, one can see the manufacturer’s name: Mauser Aktiengesellschaft Oberndorff (Aktiengesellschaft, which means “Corporation”, is abbreviated A:G here). The initials of these words, MAO, are stamped in the Japanese Mauser holster I have (see below).

The ID markings L.D. 277 are stamped on the front grip. Someone who was reading this site e-mailed me with the key to their significance. Apparently the L.D. stands for Landjaegerai Duesseldorf. He referred me to a website on German weapon markings at German Police Unit Marks, 1920-1937. The Landjaegerai (literally “country hunters”) were apparently a sort of rural constabulary like a sheriff or reeve’s office. 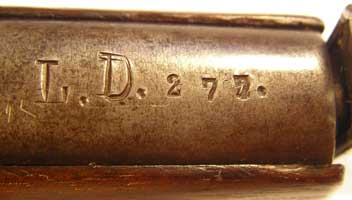 The rear end of the striker protrudes from the back of the gun to indicate when it is cocked. All the parts I can see have matching numbers. 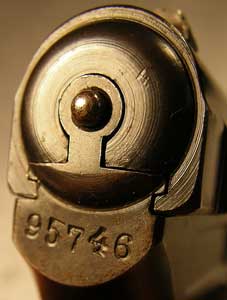 The right side of the magazine… 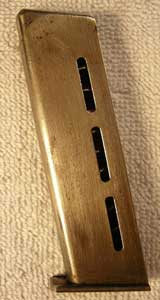 Another popular pocket pistol was the Model 1903 Colt. They cost Japanese officers 100 yen at the time, compared to 180 yen for a Baby Nambu. I got this one for a ridiculously low price at an auction in August, 2005, so I didn’t mind the rough condition of the finish. The Derby & Brown book shows one of these on page 283 and three holsters for it on pages 291-292. 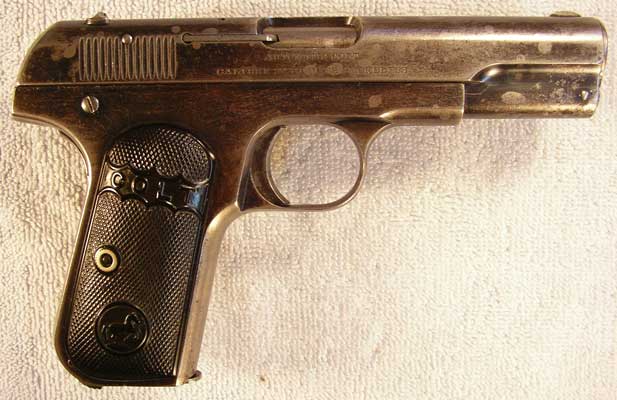 The serial number, located just above the trigger guard, is 7914, which indicates it was made around 1905. Hard to believe this gun is 100 years old! 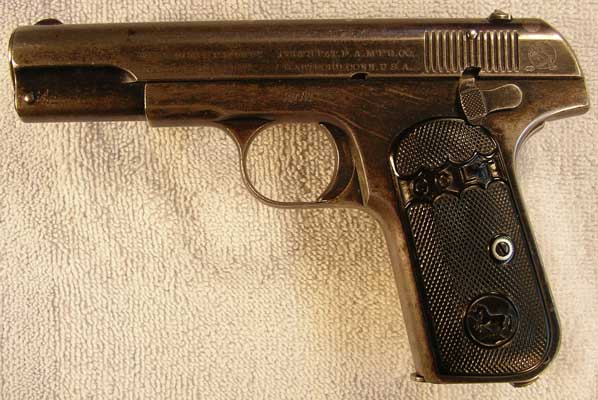 Here is the Colt field stripped. I found it easy to get apart, less easy to get back together. Note that this is an early model with a separate barrel bushing (upper right corner of photo). 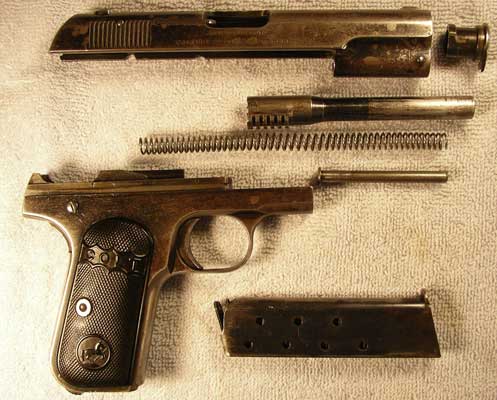 The right side of the mag…

and the left side.

The Browning Model 1910, usually in 7.65mm (.32ACP), was another very popular private purchase pistol among officers. In fact, this is probably the type of gun carried by Colonel Hiromichi Yahara, the third in command on . In his book “The Battle for ” he mentions that when all was lost and he slipped out of the final headquarters cave at Mabuni to attempt an escape, he “took a couple of dried bonitos and a .32-calibre Belgian Browning pistol”. He did not have it long, however, as he had not gone far before he slipped and accidentally fired, dropped and lost the pistol (pp. 162-163). 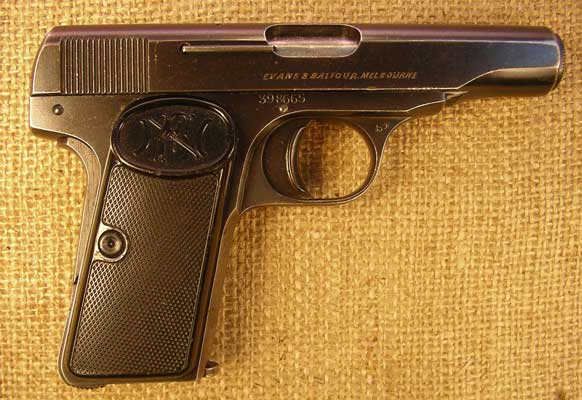 Here is the left side. 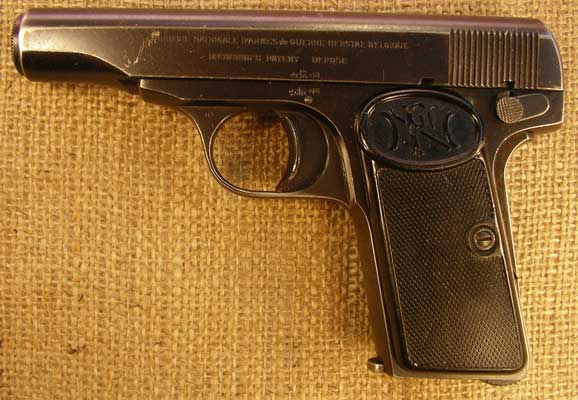 The markings on the left indicate the manufacturer, Fabrique Nationale D’Armes de Guerre of Herstal in , Browning’s Patent and a Belgian proofmark.

The right side has the name of Evans & Balfour, Australian gun merchants, and the serial number, which is within the range from which Japanese purchases are known to have been made. There are also a couple of small inspection marks at the upper front of the right side of the trigger guard. Japanese private purchase guns seldom have Japanese markings and were sometimes acquired through unofficial channels, such as when a Japanese ship was visiting a foreign port that had a gun shop. I have no reason to think this specific pistol had a Japanese connection, but there is no way to know for sure.

The magazine on the right came with the gun, the other is a spare I purchased. Both have similar holes on the left side. I also got a holster with the pistol, but it does not appear to be Japanese. 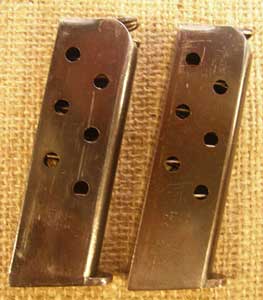 Both Magazines are marked “-FN- 7,65 M/M”. They are both blued, although the glare from the lighting makes it a bit hard to tell here. 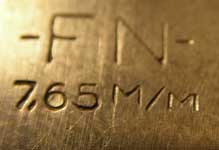 The Japanese made holsters for a wide variety of foreign pistols used by their officers. I believe this one is for a Model 1910 Mauser in .25ACP calibre. It is just slightly too small for the Model 1914 shown above. There is one that looks like this on page 289 of the Derby & Brown book. There is an identical one on pages 372-377 of the Van Lund book (even the markings are identical). One that seemed to be the same sold on eBay on April 13, 2005 for US$281.50 (the stitching on the mag pouch on that one was partially missing). 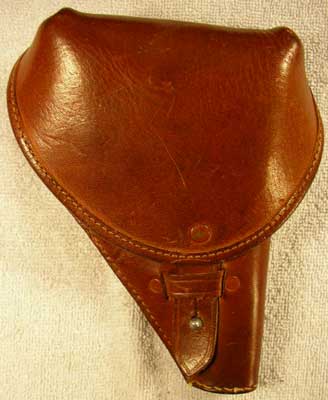 Here is the back. 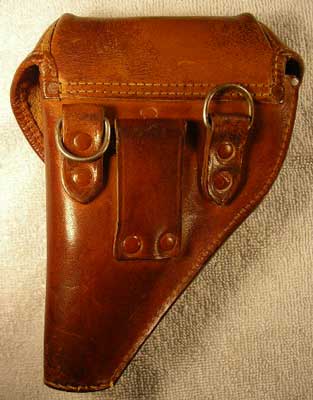 The inside shows the mag pouch and the location of the markings on the inside of the flap.

This close-up of the markings allows them to be read. The top line is Sho (short for Showa) 15, which translates to 1940. The bottom line has the letters MAO, which I believe stand for “Mauser Aktiengesellschaft Oberndorff”. This is the name and location of the manufacturer and was marked on the left side of the pistols (see Model 1914 Mauser photos above). 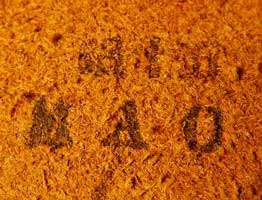 There is a small star stamped near the front edge of the holster just below the flap. The star was the symbol of the Japanese Army. The Japanese Army never officially adopted these pistols or their holsters, so I don’t know whether this was to indicate acceptance for sale at the Officers’ Club or whether it was just a hopeful marketing gimmick by the manufacturer. 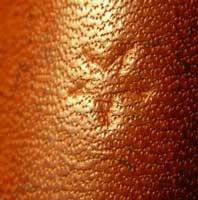 Since the foreign pistols generally had no provision for a lanyard, the holsters were sometimes equipped with a pull-out strap like this to assist in removing the pistol. I have seen several German holsters with this feature, and they were probably the inspiration for it. 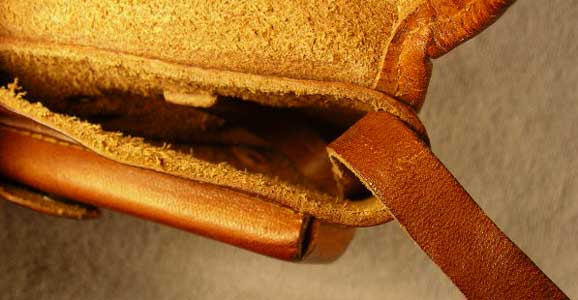 When I got the holster as part of a multi-gun, multi-holster deal in March, 2005, the inside of the closure strap rivet was missing.

My husband repaired it with a modern inside rivet piece; later I discovered this was almost exactly what the original looked like, although this one is shinier since it lacks 65 years of patina.

As noted above, the Japanese manufactured ammunition in several “foreign” calibres. .32ACP (7.65mm ACP) seems to have been by far the most common, although today all such cartridges are rare. Even rarer is this original Japanese box for .32 ACP cartridges. A similar one in better condition is shown on page 298 of the Derby & Brown book. 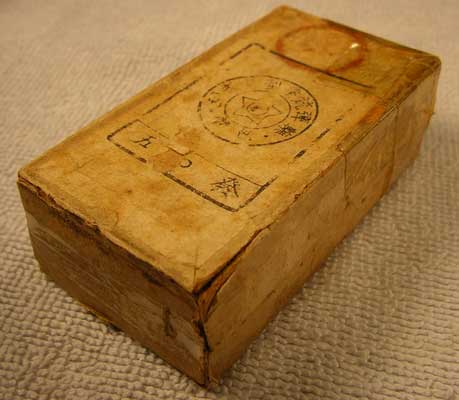 The top of the box has a now-illegible red stamp, a circular label and the line go-ju-hatsu (50 rounds) at the bottom. 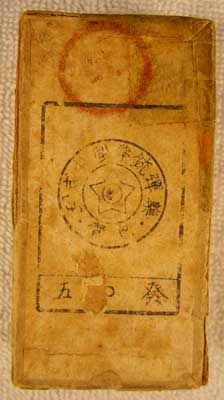 That circular label has the Tokyo First Arsenal symbol in the centre. The markings read clockwise and start about 7 o’clock, after the dot: mo-shiki-chu-gata-ken-ju-dan-yaku, i.e. “Mauser-Type medium-sized pistol cartridges”. In between the dots at 5 and 7 o’clock are the two characters jip-po, i.e. “live rounds”. 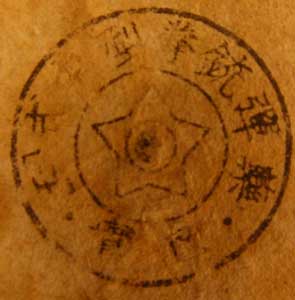 The bottom of the box is also marked. 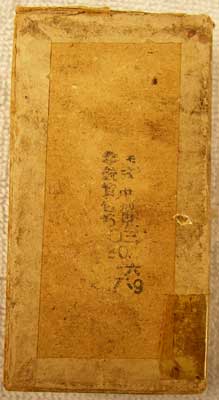 The markings have two vertical columns of four characters each at the top. They are read right column, then left column: mo-shiki-chu-gata-ken-ju-jip-po (Mauser-Type medium-sized pistol live rounds). Then there are two horizontal rows: 03, with the three written in kanji, and then 302 in Western-style numerals. The bottom two rows appear to be the date. The single character second from the bottom is Tai as in Taisho. The bottom has eight written in Kanji and nine written in Western style. This would seem to indicate a manufacturing date of Taisho 8, ninth month, i.e. September, 1919.

Japanese .32 ACP cartridges had no headstamp; examples can be seen at: Original & Collectible Ammo

Last updated: June 3, 2006. All contents are copyright Teri unless otherwise specified and may not be used elsewhere in any form without prior permission.

Click here to go back to the main page: Nambu World Home Page