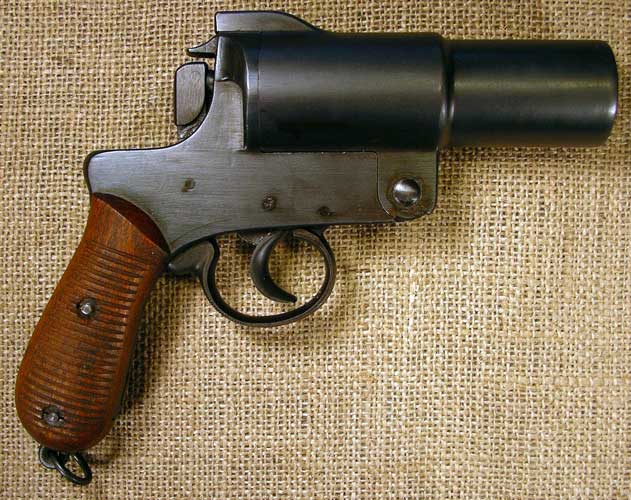 The flare gun shown above is the Type 10, the mainstay of the Imperial Japanese Army. The designation comes from the year it was introduced, 1921, which the Japanese called Taisho 10 (the tenth year of the Taisho Emperor, Hirohito's father). It is a single-shot, single-barrel, double-action-only unit that fires a 35mm flare. This was the second-most common of the Japanese flare pistols. Around 8,300 were produced by the end of the war in 1945.

The left side (below) shows the model designation and serial number. Apparently the arsenal mark and serial number appeared on both sides of very early pistols. A very small number of the early ones also had a safety on the left side, a completely superfluous device on a double action revolver that was quickly dropped. Apart from these rarities (only four are known), most Type 10s are pretty much the same, differing only in minor details like the contour of the trigger guard and, of course, the level of finishing, which declined as the war progressed. 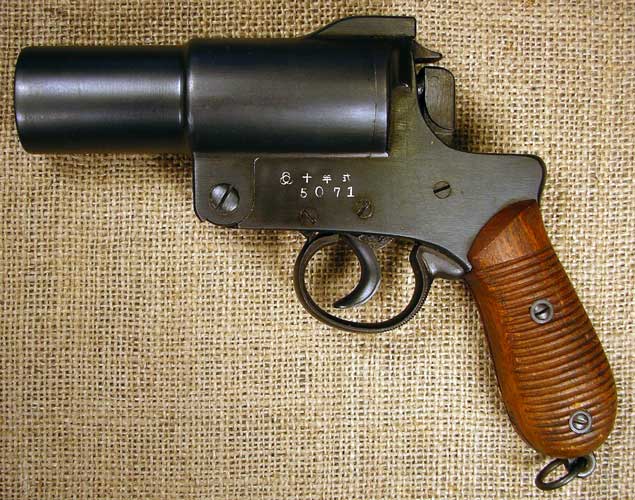 Here is a close-up of the markings. The "cloverleaf" symbol was used by Tokyo and then Kokura Arsenals, and represents four stacked cannon balls viewed from above. The three characters that start with one that looks like a plus sign are ju-nen-shiki, meaning "Type 10". Below that is the serial number, 5071. Production was moved from Tokyo to Kokura Arsenal's second factory in 1935 around serial number 1400. That factory averaged about 700 pistols a year until production was moved to another part of Kokura Arsenal in 1944. That means this specimen was probably made around five years after the move to Kokura, or about 1940, give or take a year. That estimated date matches the holster the pistol came in, which is dated 1941 (see holster photos further below). 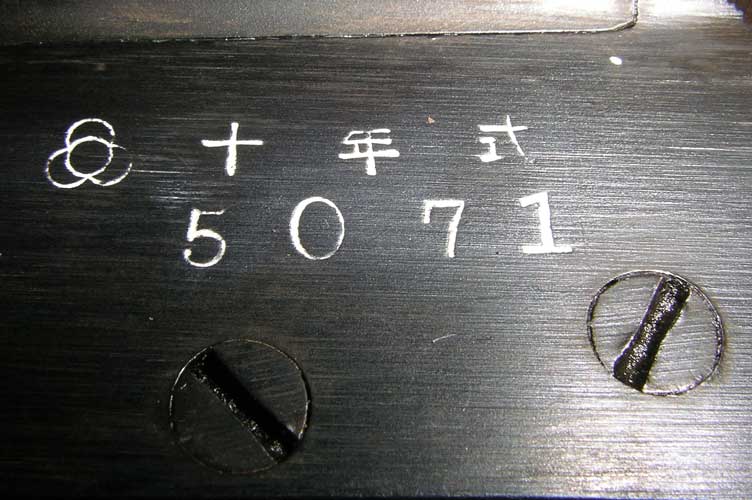 In this shot of the back you can see that the grip frame is offset to the right to accommodate the main spring.

Although a flare gun is not considered a firearm in either the USA or Canada, looking at the "business end" is rather intimidating, as the bore is 75% larger than a 12 gauge shotgun! Note the pristine condition of the barrel. The whole gun is in outstanding condition. 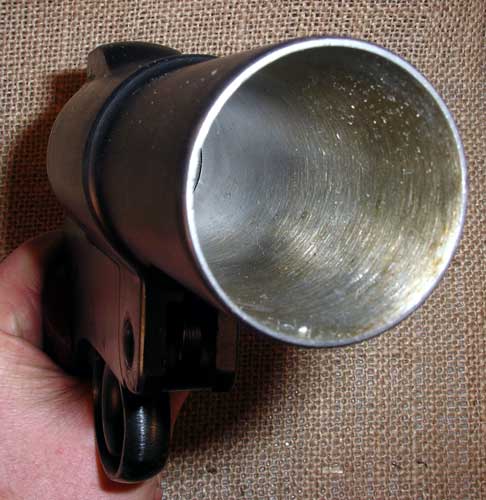 Here is a close-up of the hammer and latch. The trigger has no cocking spur since the Type 10 is double action only (i.e. pulling the trigger cocks and fires it, with no need for a separate cocking step). The projection above the hammer is the latch. Pushing down on it opens the action, allowing the barrel to tip downward. 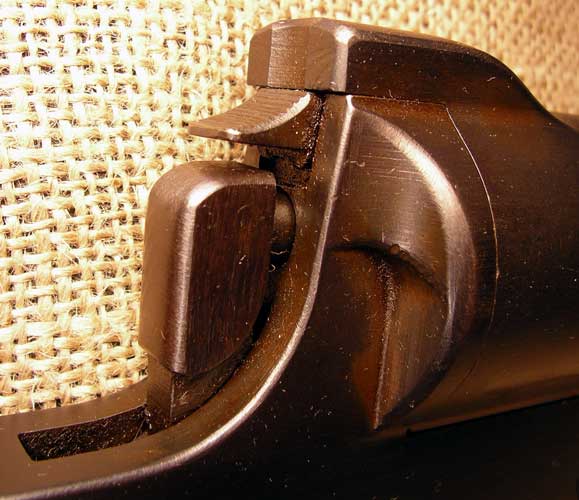 Here is the Type 10 with the action open and barrel tilted downward for loading. The actual locking mechanism is the projection on top of the latch, which fits up into a recess in the top rear of the frame when the gun is closed. You can see that recess on the bottom of the part of the barrel assembly that overhangs to the rear near the top of the photo. 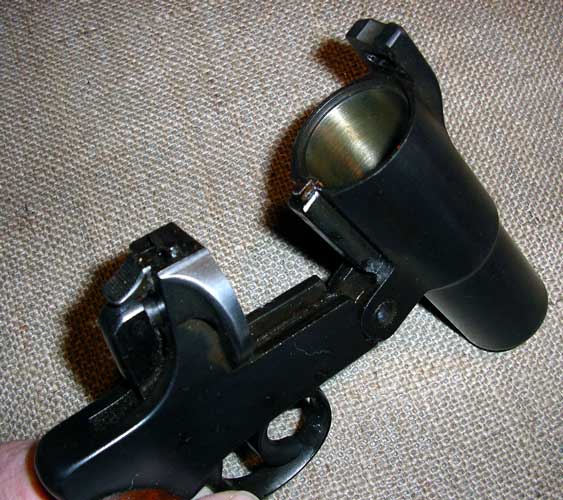 If you are familiar with Japanese handguns, you may have noticed that the Type 10 bears a strong resemblance to the Type 26 revolver. Here you can see the similarity, which extends to the mechanism inside, too. The Type 26 shown here has the late, grooved style of grips that was used for 1930s rebuilds and a small number of late production specimens, rather than the checkered ones that were originally fitted to early revolvers. 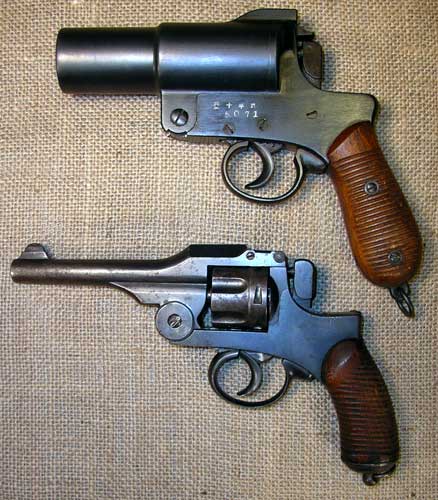 One of the peculiar things is that this similarity extends to having a grooved area on the bottom of the trigger guard, though the Type 10 does not come apart in the same way as the Type 26. 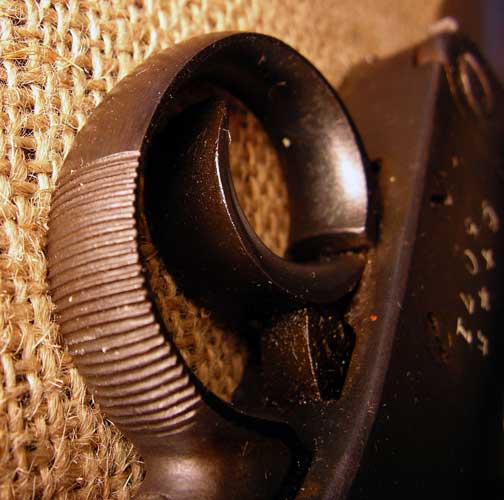 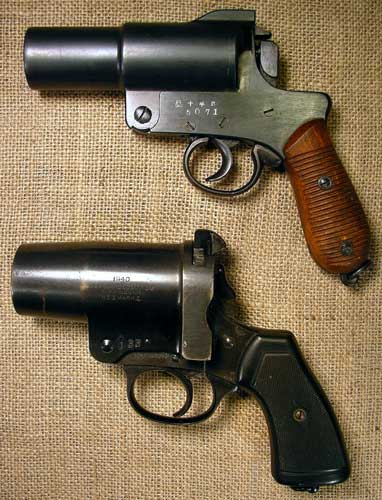 Here is the leather holster for the Type 10. Like most Japanese holsters, it provides almost 100% coverage. Late in the war a few holsters were made of canvas or other substitute materials. 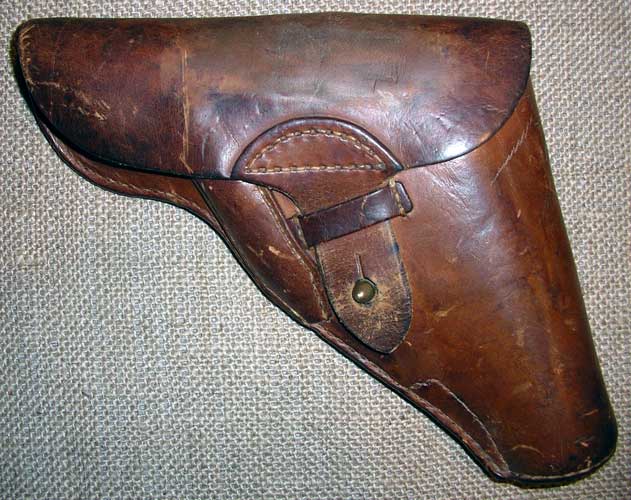 Here is the back, showing the rings for the shoulder strap. The rings are steel, unlike the closure stud on the front, which is brass. 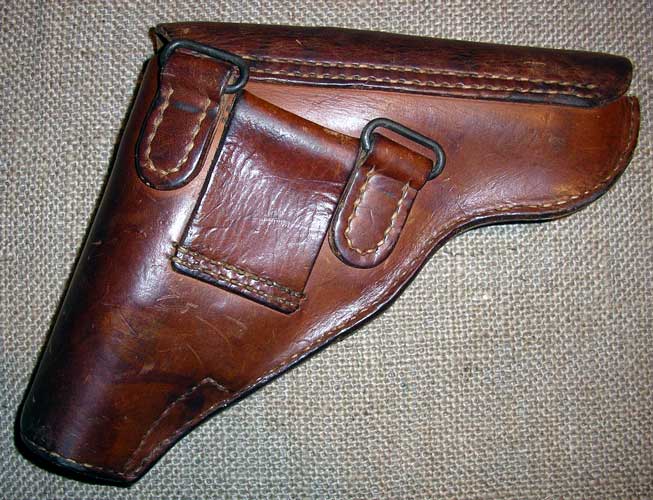 Here is the Type 10 in its holster. You can see why the Japanese were big on using lanyards, as it is hard to grip the gun without using one to pull it up a bit first. Note the wear mark on the inside of the flap where the bump at the back of the frame rubs. Just above and to the left of that you can faintly make out the markings in the holster, which are shown in close-up further down this page. 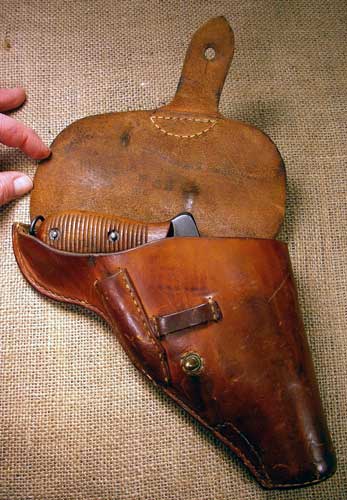 Here is a close-up of the area around the closure stud. The little pouch is for a folding screwdriver. Unfortunately I don't have one to show you. 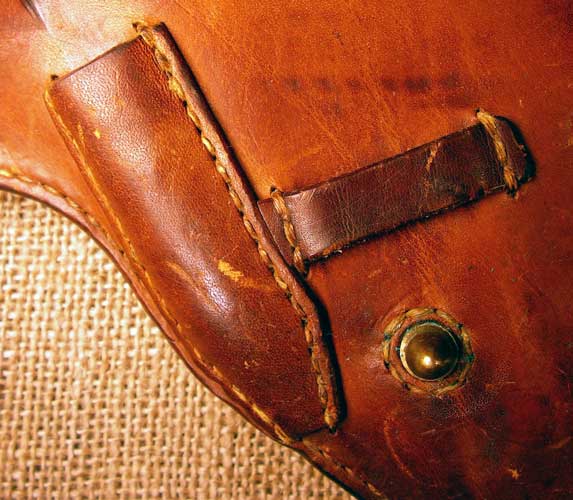 Here is a close-up of those markings inside the holster flap. They are very faint, but still legible. The mark in the upper right is the kanji sho, short for Showa, the name of Emperor Hirohito's reign. To the left of that are the kanji numbers 10 and 6, one above the other (the ten looks like a plus sign). Putting these together means the holster was made in Showa 16, i.e. 1941, which corresponds to the approximate date the pistol itself was made. Below that is the "four cannonballs" (cloverleaf) mark of Kokura Arsenal (earlier used by Tokyo Arsenal). This photo has been rotated 90 degrees (a quarter turn) to the right from how they are stamped on the flap. 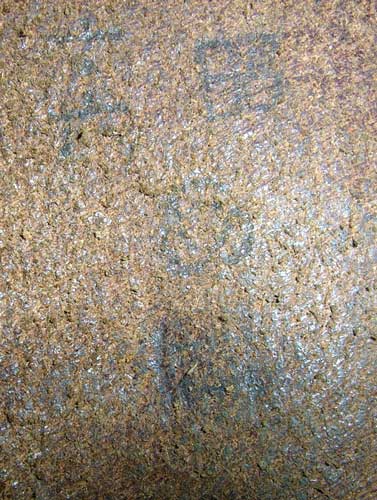 Although the holster is still in pretty nice shape, it does show more wear than the pistol that was inside it. Of particular note is this abraded area on top of the flap. I don't know whether this was due to some piece of equipment rubbing on it or whether it is a result of someone trying to remove something that was marked there. 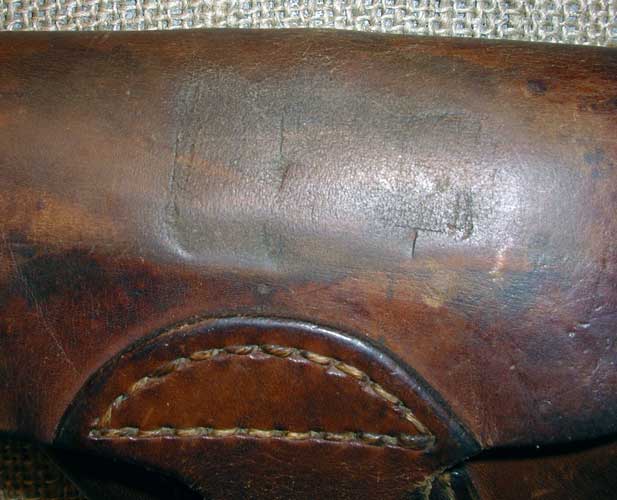 On the toe (the very bottom) of the holster are the initials BM. These are probably the initials of the GI who brought it back to the USA as a souvenir. This was often done to avoid conflicting claims about ownership of souvenirs (I have a Type 14 pistol holster that also has an English name carved in it, and have even seen names carved into rifle stocks). Whoever you were, BM, thank you for preserving this piece of history! 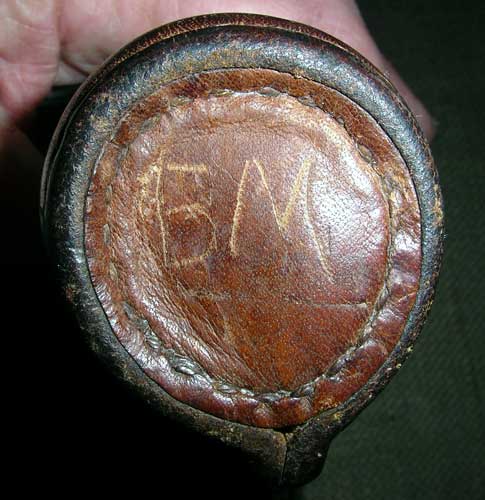 I don't have any period photos of Japanese soldiers with Type 10 flare guns, but I was given the kind permission of Mr. Walter Kierzkowski to reproduce below this photo of his father, PFC (later SFC) John J. Kierzkowski (right, holding bottle in left hand), with an unidentified fellow GI in Toriimatsu, Japan in 1945 or 1946. Note that both are holding Type 10 flare guns that they later brought back to the USA as souvenirs. SFC John J. Kierzkowski served in the 25th Infantry Division ("Cacti's") in the invasion of the Philippines. He was due to participate in the invasion of Japan, but when the Japanese surrender made that invasion unnecessary, he served in the Occupation forces in the early years after the war. 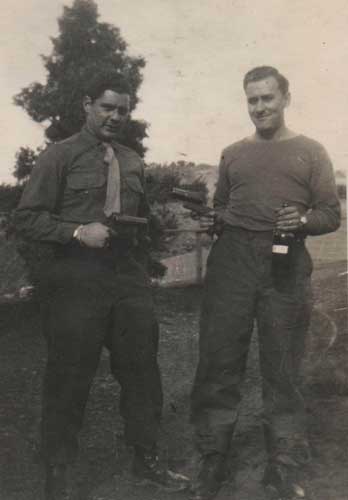 Last updated: June 26, 2009. All contents are copyright Teri unless otherwise specified and may not be used elsewhere in any form without prior permission.