The first public display of my collection was at the Alberta Arms and Cartridge Collectors Association (AACCA) Spring Gun Show, , at the Round-up Centre on the Stampede Grounds here in . It is ’s largest gun show, with approximately 500 tables, and I won an award! Besides first prize and second prize, there are eight “Judges’ Awards”, sort of like “Honourable Mention”, and I won one of those. I also got a lot of very positive comments from the general public and the judges. People had never seen the kind of stuff I was displaying and also liked the attention to presentation in my display. I had to pay attention to presentation as I had only seven guns in my exhibit! Here I am receiving the award and a cheque for C$200 (US$150) from Hank Holmes, the president of the AACCA.

Here is an overview shot showing the whole display. I had two 8-foot tables, with five display cases and a TV/VCR set up to play a video on Japanese guns of WWII. The cases run chronologically from right to left, starting with a display on the Type 26 revolver. I had originally set it up to run left to right but then changed it before the show opened as I was near the door and the traffic flow ran right to left. To give the display a “Pacific Theatre” feel I used a coarse grade of burlap for the table skirt and a closer woven grade for the background on the explanatory panels.

This one shows the centre and left side of the display. The TV/VCR are just our of the shot to the left. The panels are 24”X36” poster boards held upright by bases made of plywood and 2X4s. The posters are wedged firmly between the two pieces of 2X4 which we laid on their sides and screwed to the plywood. They pull out for ease of storage. The captions on the panels are “Frequently Asked Questions” (left) and “Japanese Handgun Training and Usage” (right). 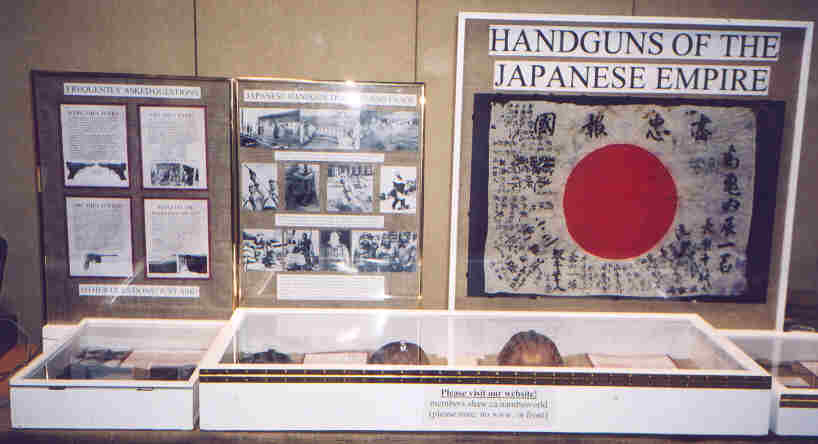 Here are the sign boards on the right side. The captions are “A Japanese Soldier Goes to War” (left) and “Kijiro Nambu: ’s John Browning?” (right). The one with the photo of Nambu has a WWII US military poster of Japanese infantry weapons. I put red dots beside the weapons Nambu designed, modified or had his company produce (the dots were added after the photo was taken). 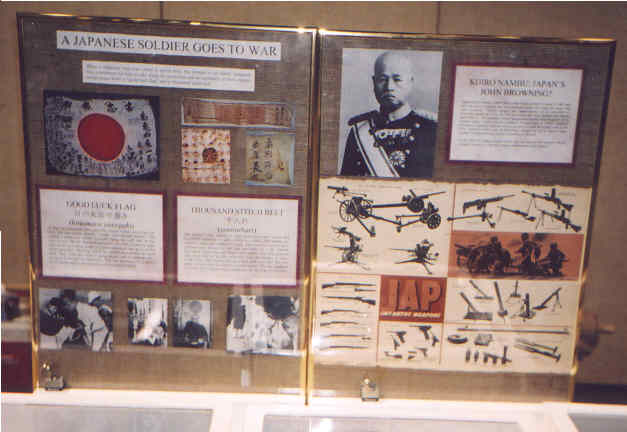 Here is the first display case with the Type 26 revolver, holster and cleaning rod. All items displayed were original (no reproductions), though the period photos were all photocopied from books. I used my own colour photos to show rear or interior views of the items. 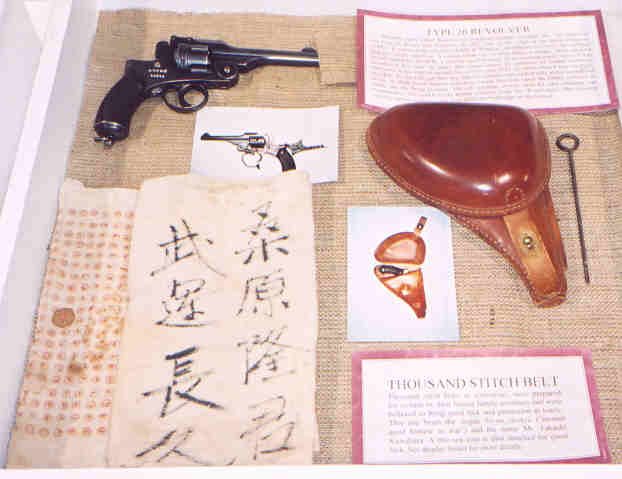 This case had my Baby Nambu with holster and cleaning rod. I used the book dust cover to show what the Grandpa Nambu and Papa Nambu look like as I don’t have one of either yet. The little pieces of burlap near the end of the barrel of each gun is used to cover the locking rods I used for security (see below). The Canadian government’s gun show display regulations are very strict and not all exhibitors meet them as strictly as I chose to. 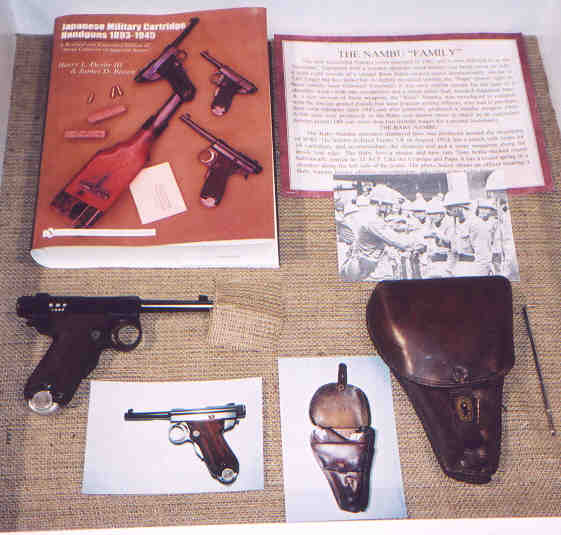 This case had my Type 14s. I had one disassembled in the upper right corner so that people could see that it doesn’t work like a Luger, which seems to be a common misconception due to the similarity in shape between the two pistols. I also showed Type 14 magazine and cleaning rod variations here.

I had one huge, five-foot wide case that I built in case I ever wanted to display rifles. This time I used it for my five Type 14 holsters and my ammunition display (the ammunition must be displayed separately from any guns). The little booklet above the second holster from the right is a mint condition Type 14 instruction manual which I have almost finished translating (as of mid-April, 2004).

Here is the ammunition display. I showed both WWII rounds and post-war production. Among my prized items here is a mint 8mm Nambu practice round. The 8mm rounds are in the top row above the boxes and the 7mm and 9mm are below the boxes. I have an original WWII 8mm box on the way, but it wasn’t here in time for the show. 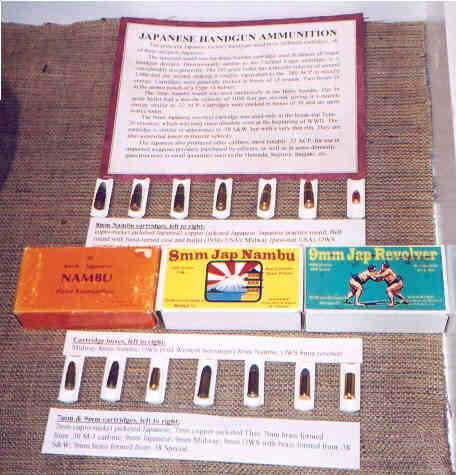 The last case showed the Type 94 with holster and magazine varieties. I don’t have an original cleaning rod for it yet. The close-up photo of the gun was captured from a video and shows it being fired by pressing on the exposed external sear rather than the trigger. 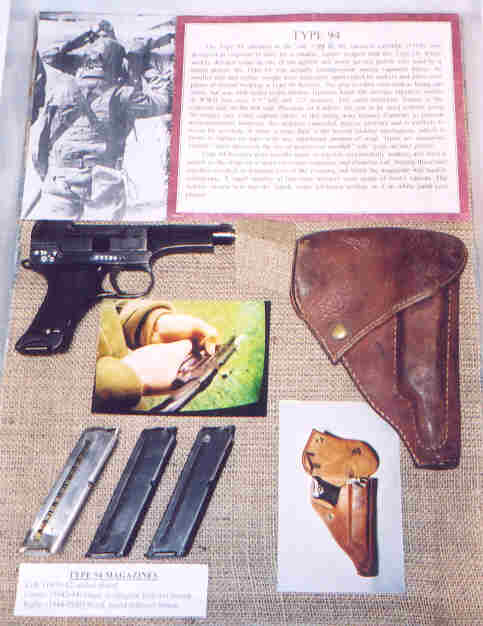 I had three levels of security. First, each gun had a special locking device which I designed and had my husband make (he’s a handy guy to have around!). The brass rod fits in from the breech end and then a lock fits through a hole in the end that sticks out the muzzle. Second, each case was locked. Third, all the cases were locked to the table with a length of plastic-coated wire rope.

Here’s how they work. On the semi-autos you have to take the gun apart, drop them in the barrel, then re-assemble the gun. On the Type 26 you just break open the action and drop it in, as shown below. 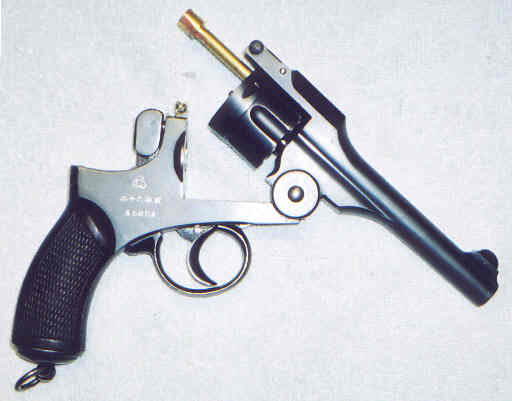 The end result looks like this when installed in a Type 14. 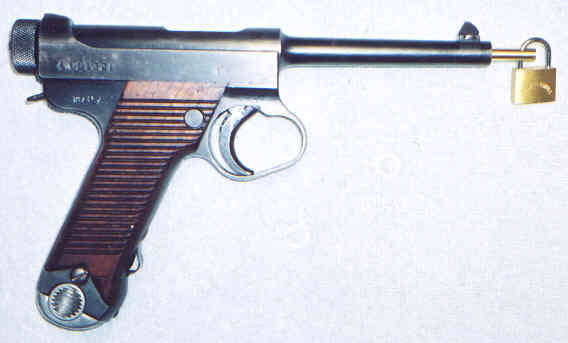 Besides winning an award, I got a great deal on an NCO sword, picked up some cartridges I needed and got a lead on a Type 14. All in all, it was a great show, and to make it even better, while it was going on our house sold for the full asking price!

Last updated: . All contents are copyright Teri unless otherwise specified and may not be used elsewhere in any form without prior permission.