This shot shows several different 6.5mm X 50 rounds for the Arisaka. The two on the left are Japanese. The two in the middle are Chinese. Second from the right is a WWI British round (the Brits bought some Arisakas). The one on the far right is a current production Norma commercial loading. 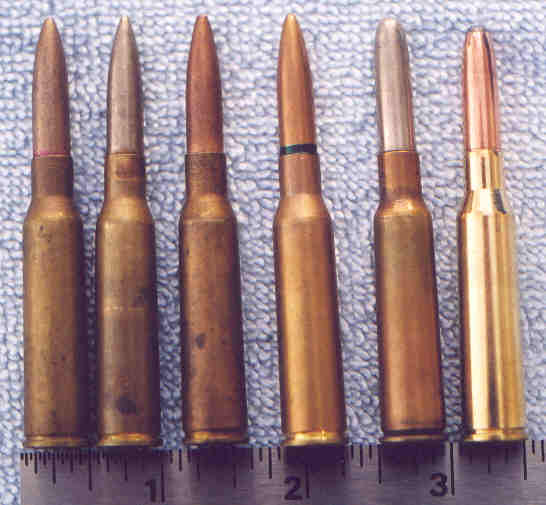 Here are the heads of several different 6.5mm X 50 cartridges for the Arisaka. The top two are original Japanese rounds, one with the primer staked in place and the other without primer staking. Lower left is a WWI British round (the Brits bought some Arisaka rifles in WWI), and lower right is a current production Norma round. 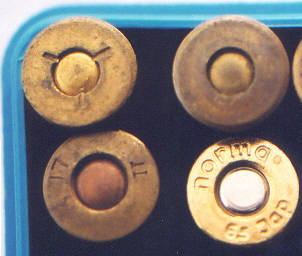 The Chinese made 6.5mm ammo for captured rifles both during and after the War. Here are three different headstamps. The one on the far left is a wartime Chinese round. The cartridge rotated a little, but at the top ( in the photo) is 65 for 6.5mm, and at the bottom ( in the photo) is a factory number. The 33 corresponds to 1944 (33 years from the founding of the Chinese republic in 1911) and the 8 corresponds to the month of manufacture (=August). The next two rounds are dated in the usual way (e.g. the middle one has 50 8 indicating August, 1950), and a factory marking.

Here are four more 6.5mm rounds I got recently. On the far left is a grenade launching round with a wooden bullet. Next to it is one with a red projectile. It is a paper bullet blank. The one with the stubby, barely visible projectile is a gallery practice round. Unfortunately it is drilled on the rear side and has had the “primer” removed as well. The one on the far right is a bit of a mystery. It appears to be a gallery practice round with a lead ball that became separated from the case (hence the wooden plug to keep the powder in the case). However, I have not been able to find any reference to such a round in my books. 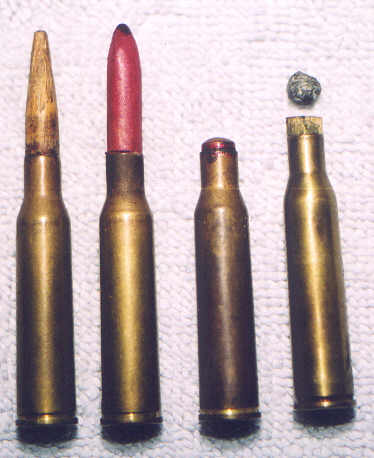 Here are seven different 7.7mmX58 cartridges for the Arisaka rifle. The one on the far right is a modern Norma commercial loading. The others are all WWII era Japanese. The one on the far left with the pink band is an ordinary ball round. Next is an armour-piercing round with a black band and a tracer with a green band. In the middle is a lacquered steel case, and then a steel case without lacquer. I don’t know whether that one had lacquer and lost it or was made that way. The last one, second from the right with the two rows or grooves stamped into the case, is a practice (dummy) inert round. The small dark mark just below the neck is a minor dent. 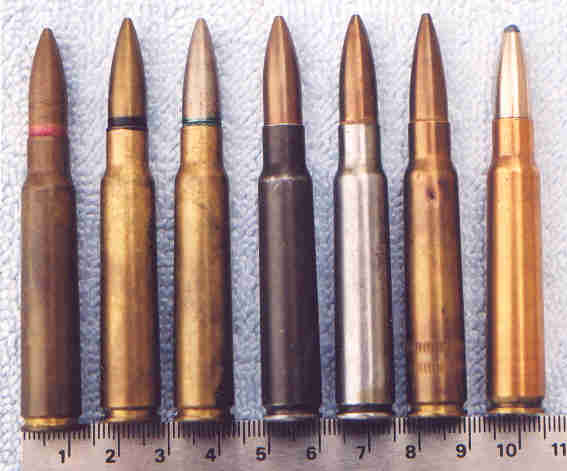 The cartridges I have use two different types of staking the primers, a circular one and three stabs. 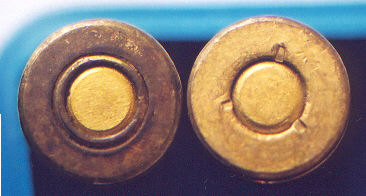 Here are a couple more 7.7mm rounds I picked up. The one on the left is a blank with a “projectile” made of red paper. As you can see, the top is split open a bit. If you peek in you can see that the red paper covers a shell of thin cardboard. The one on the right is a gallery practice round. Like the 6.5mm gallery round above, it has been drilled on the opposite side and had the “primer” removed.

This shot shows the three different 7.7mm rounds used by the Japanese. On the far left is the rimmed 7.7mmX56 round, in the middle a Type 92 semi-rimmed round, and on the left, the standard Type 99 7.7mm “rimless” ball round used in the Arisaka rifle. The semi-rimmed and rimless rounds can be hard to tell apart visually. However, when I measured them with digital calipers there is definitely a difference. The rimless round has a “rim” diameter of about .474 inches, while the semi-rimmed round has a rim of .496, a difference of 22 thousandths. 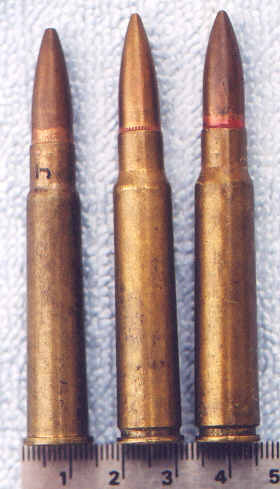 Here are three practice/dummy rounds for Japanese rifles. On the left is an early 6.5mm dummy. The centre is a later 6.5mm dummy design. The one on the far right is a 7.7mm dummy. The “primer” on it still remains unstruck! This shot gives a good idea of the relative sizes of the 6.5mm and 7.7mm rounds.

Norma makes ammo in both 6.5mm and 7.7mm Japanese. In you can get it from Ellwood Epps in , and it also sometimes turns up at gun shows. Although Norma is a high quality manufacturer, not everyone likes their Arisaka ammo. The reason given is that the Norma brass is supposedly made according to official SAAMI specs and tends to be undersized relative to actual Japanese rifle chamber dimensions. This results in thinning of the case head and short case life. 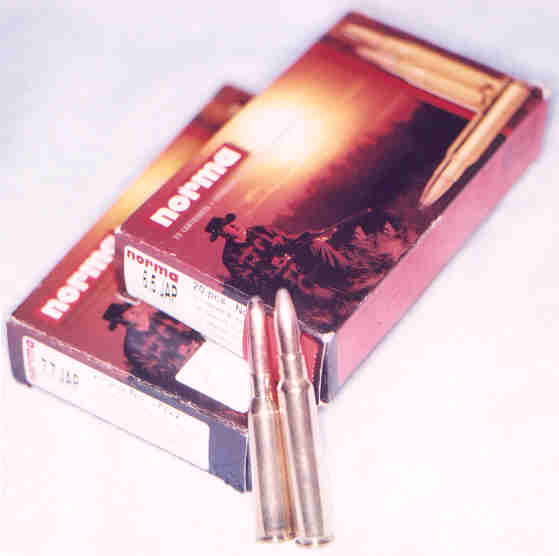 Hornady has now made custom ammo in both Arisaka calibres, but it is only available through the distributor Graf & Sons. Since they do not export, this ammo is not generally available in . One supplier of the Hornady ammo in the that is able to export Hornady brass to is Buffalo Arms in . Here is a link: Buffalo Arms Co. – Japanese stuff. I have ordered some of their brass. At a gun show in Edmonton in December, 2005 I also discovered a small business that brings the Graf/Hornady ammo into Canada, Ray’Ner Shine Gunworks in Lancer, Saskatchewan, so I was finally able to get a couple of boxes of each (all they had with them). I have heard that the Hornady brass is better than the Norma as well as cheaper. 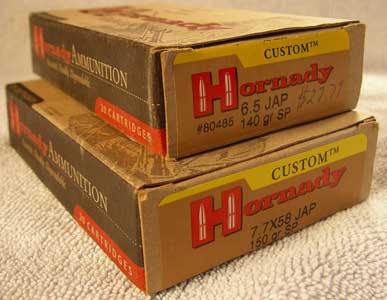 The ammo itself, however, is headstamped Graf, after the distributor that orders it. 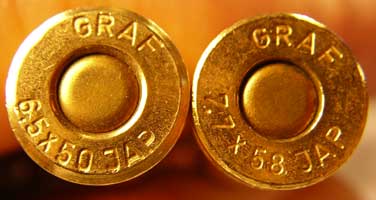 It’s nice looking ammo, as one would expect from a manufacturer like Hornady. The 6.5mm is on the left, the 7.7mm on the right.

I have a book entitled: Japanese Ammunition 1880-1945 (Ammunition Information Manual No. 5) by Ken Elks, 1981, which covers ammo up to 40mm. I also have a reprint of a March, 1953 US Army Technical Manual TM 9-1985-5 “Japanese Explosive Ordnance (Army Ammunition, Navy Ammunition)” that has some minor coverage of small arms ammunition on pages 270-278. The Honeycutt & Anthony book Military Rifles of Japan also has a section on rifle ammo. Early Made Japanese Military Small Arms Ammunition by Teruaki Isomura covers all the early ammo from the 11mm Murata up to the early 6.5mm for the Type 30 rifle.

Last updated: December 6, 2005. All contents are copyright Teri unless otherwise specified and may not be used elsewhere in any form without prior permission.